Top cities for students in the USA

The United States has proven to be home to some of the world’s best cities for students.  In the QS Best Student Cities ranking 13 US cities were mentioned among the top 100 places to study. Along with this, the US Department of Education made a prediction for the year 2020. Namely, a higher education level will be required in more than 60 percent of all jobs in the USA. Having this in mind, one should pay close attention when choosing their future college or university. Luckily, the United States is huge and there is a large number of the highest-ranked student cities. This means that anyone and everyone can surely find the perfect fit for them.

Highest-ranked cities for students in the US

Do you want to feel like you are at home while getting your degree in a small town university? Or do you look for experiencing the rush of student life in a big city? The US will definitely have a place to suit your needs. Take into consideration in which environment you would adjust best. Which situation would best accommodate your wishes? Which situation would challenge you in the right way? Based on your preferences, you will know what to look for when you do your research. Would you like to spend your student days in a local small town university? Here, you would have the opportunity to live comfortably and steadily. Or are you a free spirit longing for the energetic rush of a bigger city? Here, you would experience new challenges every day.

Take a look at the following list of the 10 highest-ranked cities for students in the US. See if any of them spark your interest. 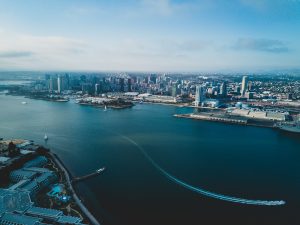 This city took the 80th place in the Best Student Cities ranking. The  San Diego State University (UCSD), makes it one of the top cities for students in the USA. It’s located in the La Jolla neighborhood which is a seaside community. The beaches and the beautiful Californian weather will definitely draw the attention of many future higher education students. Not only is the environment on a desirable level, but also UC San Diego is a highly regarded research institution. It will surely provide you with the best education possible.

With its top institution Carnegie Mellon University, Pittsburgh took 68th  place in the list of the top cities for students. Pittsburgh is a desirable location for many students. It has living costs lower than many other cities in the United States. Additionally, its top university is a nonprofit university. It consists of seven colleges with many programs on offer.

Atlanta placed 62nd in the list of top cities for students. It is known for its progressive outlook and the role it had during the Civil Rights Movement in the 1960s. Over the years, it has become one of the United States’ main attractions.  Moreover, it is a major art, music, technology, and historical center. Also, it offers three internationally ranked universities. Georgia Institute of Technology (Georgia Tech) putting the emphasis on science and technology.

The capital of the United States took the 60th place in the ranking of top cities for students. It is often considered as one of the most livable cities of this country. Additionally, it is one of the most culturally rich cities in the US. With many famous attractions and landmarks, its desirability is undeniable. Along with this, it has a number of highly acclaimed universities. One of its best representatives is the University of Maryland, College Park.

Philadelphia, home to three top universities, ranked 58th best student city. It has an amazing background (the signing of the Declaration of Independence in 1776). Also, it offers famous excellent food such as the Philly cheesesteak, pretzels and Irish potato candy. Because of this, it is one of the most exciting cities for students. Furthermore, the University of Pennsylvania  (ranked as the 19th university in the world) promises excellent education.

Chicago is the home to one of the top 10 universities in the world, the University of Chicago. It offers an undergraduate college and a number of graduate programs. Along with this, the city is known for its lively nightlife, excellent music performances, blues, and jazz especially. Moreover, it has amazing architecture and food (Chicago style deep dish pizza). All of this makes this city very desirable as a top city for students in the USA.

Listed at number 38 in the ranking of the best student cities, San Francisco has four internationally ranked institutions. These include Stanford University which is one of the most well-known universities in the entire world. Furthermore, San Francisco is a cultural, commercial, and financial center of this part of California. Unsurprisingly, this makes it a highly recommended city for future students.

Los Angeles took the 35th place in the ranking of the best student cities. Being the home to Hollywood it is the ‘Creative Capital of the World’. Furthermore, with its diverse community in mind, it can safely be said that it has something to offer to everybody.

New York City reached 18th place on the list of the Best Student Cities. It proved to be the most desirable city for students to continue living in after graduation. This is due to the fact that it offers a fast-paced life and many attractive opportunities. For students who long for the vibrant city life experience, NYC is a great option for education. There is no doubt about that.

Finally, Boston is the home to two of the world’s top universities, Massachusetts Institute of Technology (MIT) and Harvard University. Both of them contributed to Boston reaching the 13th place on the list of the Best Student Cities. Additionally, it has the largest population of students in all the cities mentioned. Moreover, it has the largest number of students who come from other parts of the world. This is probably due to the fact that it is one of the most economically powerful cities in the world.